A few years ago, I discovered my passion for writing.

Growing up, I had always been the math and science geek in the family, while my sister excelled at those humanities subjects, like history and English.  In school I was the annoying girl who looked forward to tests—so confident was I in my abilities to fill out all the right bubbles on the scantron.  But assign me an essay and I would avoid and procrastinate and dread every moment I would have to spend in front of the computer screen typing.

Then, in 2014 I started blogging.  At first I wrote informational articles for clients.  This was mildly enjoyable for me.  I liked teaching and explaining things in a way that other people could understand.  But it wasn’t until I lost my heart dog and my grandmother in the span of just a few short weeks that I discovered what writing was really all about.  Writing wasn’t about facts and figures.  It wasn’t about research and proper citations.  All of these things are important of course, when writing to share knowledge with others, but they are not the core of the writing experience.

I was still reeling from the loss of the dog who had accompanied me into adulthood when my Grandmother decided she had had enough of this mortal coil and began refusing IVs and diagnostic tests, medicine and food: the basic necessities of life that tie us to the physical world.  I had been a vet long enough at that point to understand that there comes a time in life, where living is no longer the ideal outcome.  My grandmother had come to that point, and though it hurt my soul, I respected her decision to leave this earth and end the suffering.

And so I wrote.

I laid my heart out in words and I found solace in doing so.  Facts and figures had their place in writing, but it was the emotion, the story, the personal experience that gave the words meaning.  And suddenly I found my words reaching more and more people.  My experiences mattered, my story mattered, and my audience grew.

Writing became my outlet when the emotions were too strong to keep inside, as they often are in a field like veterinary medicine.  And seeing the impact that my words could have on others was empowering.  I could make a difference, simply by letting people know they weren’t alone in the emotional experiences, the highs and lows, the love and frustration, that accompany life in a veterinary clinic—or life in general.

And the more I wrote, the more I realized that this was what I wanted to do.  I wanted to share my experiences as a vet; I wanted to help others discover their place in vet med; I wanted to make the veterinary field a healthier, more fulfilling career for the people, like me, who had chosen a life of caring for animals.

But I was stuck.

I had a small following, and the support of some great mentors, but I didn’t know how to take it to the next level.

And so, when I was approached by my friend, Danielle Lambert, of Snout School fame, to tell me about her new project, I was stoked.  She, along with the venerable, Dr. Jessica Vogelsang, creator of Pawcurious and author of All Dogs Go to Kevin, were creating a squad—a Snout Squad.  A group of 30 strong, female voices in veterinary medicine who would all come together to build each other up.  Together we would amplify our voices, promote gender equality, bring forth women leaders into this female dominated field.  Together, we would make veterinary medicine stronger.

I have been asked why I joined Snout Squad.

As though there were a choice involved.  But the truth is, Snout Squad seems like more of a calling; a chance to take everything I stand for—veterinary medicine, feminism, writing, empathy, empowering others—and combine it into one group of strong, kick-ass women.  How could I turn my back on an opportunity and experience such as that?

Although the official Snout Squad launch won’t take place until later this week, I have already been inspired and empowered beyond measure by the incredible women who are part of this amazing project.  In just a few short weeks, The Vetitude has taken form and I feel my voice being amplified already. I can only hope that I am doing the same for others in the group because these women are poised and ready to break glass.

So watch out world—Snout Squad is coming and nothing’s going to stop us! 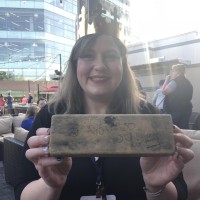